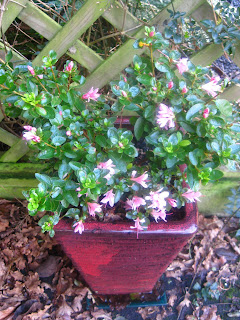 When we shifted here Anne bought a lovely, ribbed red pot to go by the front door.  What should she grow in it she asked this ex-gardener. My suggestion, ‘facing sou-west, little sun, something hardy, like a flax.’ So she did, a hybrid with delicate dull-red leaves. But the wind whirled the plant around so much it snapped off at the base. She returned again for advice. ‘That azalea with little pink flowers that we were given as a house-warming present. They're fairly tolerant plants,’ I suggested. Here it is, an early July harbinger of spring and sunshine and colour, leaving us jubilant at the success of her effort.


Something that has worked as contemplated – that’s always good..An annoying aspect in my present life is that many so many of my dreams have me able-bodied and lithe. Would that they were correct. I wake up to the limitations of my body. Despite that irritation, my mood – which I’ve been chasing in several recent blogs - is not so much serenity or resignation, but rather acceptance. This is the factor that gets so much pleasure from that little azelea.

I’ve been reading my first volume of poems ‘Against the Maelstrom’. Acceptance was not the order of those days. Rather. it was bafflement and bewilderment. The collapse of my first marriage and the beginning of a new relationship with Anne was fraught and hectic I had the career frustrations of middle management. The Cold War still dominated world politics. Just a plain ordinary middle age crisis the critic may say. But to top it off there was this urge to write and the struggle to do so..

This poem concludes that collection. The absence of free form takes away some of the visual impact of its presentation but it’s a reasonable precis of my frustration. I considered tidying and tightening it up a bit, but felt its raw emotion has its own force. It’s a snap-shot of a guy on the verge of his best years though he didn’t know it.

Against the Maelstrom
ix

..…..Subject matter:
at present reading
about the Aztecs
without the wheel or horse
& ready for the Spanish picking
they built their causewayed capital
Tenochtitlan ……..a humming bird god
Huitzilpochtli ……..demands sacrifice
human hearts still thumping
strange concepts
even stranger words
to savour
second-hand though.

……….Personal:
last month I ran over our
cat; pelvic bones are brittle
as the vet put her down she licked my hand
hackneyed theme
ripe for sentiment
(twitch sprouts now
in her hideaway)

………..People:
verbal stiletto from
a colleague
when he needs my support I ignore
solicitation
his punctured smile…
revenge is
seldom sweet

……….Childhood:
when I row across the lake
lion’s paw hills sheath their claws
try the causes of my youth:
Orwell’s Benjamin brays in the prisms
of my mind
the sails of the mill
no longer turn
with every passing breeze

……….The topical:
‘we are one nation’
trite, also untrue
ruru to you
morepork to me
there’s your theme
the swelling taniwha of intolerance
no
the failure of compassion shows

I could experiment
try the ludicrous
the angrily absurd
hot cross boffins
exploding little bombs
words like wombat
weight to ramble on the page
but to what purpose
not my style, puns
with or without bile

I’ll switch on the telly
watch the late
late
horror show
Posted by harvey at 2:03 PM