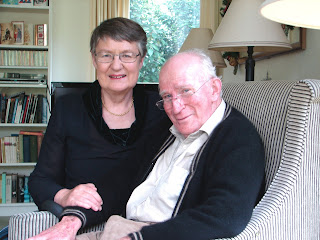 Harvey died peacefully in the early hours of Christmas Day. He had been taken to hospital around midnight on Wednesday, after a fall. By Christmas Eve it was clear that while there was no sign of any new problem such as a stroke, he was too bruised and weak to come home for Christmas as he so much wanted to do. I was worried about how well he would recover, but there was no hint of any danger to his life. So it came as a terrible shock to be phoned at 4.20 am on Christmas morning. His already greatly weakened lungs had begun to fail, and his life closed soon after.

This is how I ended the letter to him which I read at the private funeral service in Wellington, on the last day of the year.

Your ending matched you so well. Quick and quiet, definite and gentle. And above all, kind. Only, for once in your life, not kind to me - the one thing you would have wanted to change.

With all my love
Anne

A memorial service for Harvey will be held at Old St Paul's, Mulgrave Street, Wellington, at 11 am on Friday, 28 January 2011.

Harvey had planned to post, in the New Year, this poem by Mark Pirie, who has published all Harvey's own poetry under the HeadworX imprint since 1999, when Pingandy: New and Selected Poems appeared.

This Piece of Earth*

It was on a Sunday
that we drove to her place,
up there in the Cashmere Hills.

John and Elaine were the tour guides,
enthusiastic raconteurs of
'Canterbury lit tales' - and eager they were

to show Alistair and me a 'slice of history'.
I began to think, as we arrived, so
this is where 'very earnestly digging'

Ursula first raised her head
and discovered her (and our) poetry…
It's true though, most of her best poems

were about her garden
and that digging: the careful
time-honouring of place;

it's similar to what you describe
in your book. How timeless
the ordinary seems, yet so truthful

and appealing. Each one of us
spends their life, some by choice,
others by circumstance -

you and Ursula choose the garden.
It's here you both found those rare insights
into our lives. We are grateful for that.


*This Piece of Earth is the title of Harvey's memoir, published by Awa Press in 2004. At the time I was in Christchurch for the Books & Beyond Festival, May-June 2001. John O'Connor and Helen Jacobs (Elaine Jakobbson) invited Alistair Campbell and myself for a tour of the Canterbury region, including visiting Mick Stimpson's grave at Banks Peninsula, where Harvey was born. The area where Harvey grew up featured on the cover of his last anthology, These I Have Loved: My Favourite New Zealand Poems (Steele Roberts, 2010).
Posted by harvey at 7:41 PM