.
There is a time and place for rituals. They lift life above the mundane and the frenetic. Christmas is such a time. Over the years Anne and I’ve built up our own rituals, not original, but personal. For example, when she makes the Christmas pudding I always get to give it a stir.

In our previous home we put up a Christmas tree in the front room unless we were going away. Purchasing the pine was part of the fun. I wanted to keep the leaves as green as long as I could so that meant putting the stump in a large bucket of water with stones and old bricks to stabilise it. And topping up the water. I didn’t want Christmas day to dawn on shedding leaves. To further hold it I tied it up to the mantlepiece. After I’d got it steady – albeit with lots of advice, Anne and Jonathan (her son, if at home) decorated it.

For starters there were lights she’d bought years ago in London. Over the years Jonathan bought white imitation doves, gilded musical instruments and painted other embellishments. Decking the tree became more and more ceremonial. Entering in to the spirit Anne started to put up a wreath on the front door. Holiday or celebration – it was a break from the routine.

Further, and to cap it all off, Jonathan made a crib for us, painted little figurines, Mary, Joseph, three wise men and animals to surround the baby Jesus. Organising that crib became another ritual. Visitors would help Anne arrange the figures.

Since we’ve been in our new place, this is our third Christmas here, Jonathan’s been overseas. He’s teaching English as a second language in China; but coming home for a month in mid-January, an occasion to which Anne is looking greatly forward. That is one reason why we’ve reluctantly given the tree ceremony away. Other reasons include, no place to tie it up, my health, different spaces, logistics, plus a growing realisation of the need to be adaptable. .

Instead Anne has developed new rituals to retain the feel of 'Christmasy'. She places a green garland over the Robin White prints. Through it she’s threaded the doves, musical instruments, bells and other ornamanents that used to grace the tree.

Below it on a sideboard she and Jenn from next door put up this year’s crib last Sunday. The lovely painted box Jonathan made years ago collapsed from extended use in 2008. So for backdrop last and this year Anne recycled the chocolate box that Ulrike and Matthais sent us from Berlin in 2007 to celebrate our new home. Four coloured houses had shutters with a month’s supply of chocolate. It looks like a street scene from Ghent or Lubeck or any other undamaged northern Europe town. A Bethlehem manger in front of a European market town in a Kiwi house. The diversity of Christmas! Reminds me of a black Jesus we saw in a crib in Amsterdam in 1990. 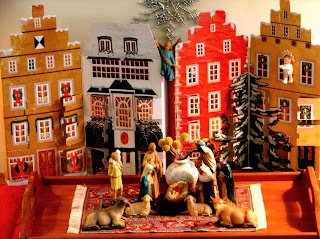 Here’s a photo of last year’s crib. Over the years it’s got additions. Each carries meaning, a gift, a token, a reminder of a location or event. For example, the baby’s cradle sits on a piece of polished greenstone I was given for speaking to the West Coast principals in1997


Jenn had made us a wreath of flax-fibre. Anne has hung that on our front door.

On the bookshelves are our Christmas cards. And dominating the whole area is the large post-card of the altarpiece we saw in Ghent. It is the Mystic Adoration of the Lamb painted by the brothers van Eyck, one the most striking piece of painting I’ve ever seen. Indeed, today's New Yorker describes it as a touchstone piece of art.  24 panels with imposing figures of Adam and Eve on either side! The touch of mysticism seems appropriate on our shelves.

I sat and ate a few cherries as I surveyed the scene this morning. They ripen now and so are another December ritual. And a reminder that in this hemisphere the season is in summer.
Posted by harvey at 11:35 AM