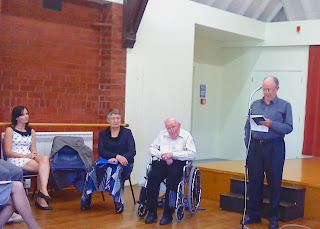 .
On Friday evening ‘Goya Rules’ was launched at St Ninian’s hall to a good crowd of friends and colleagues. As MC Barrie Keenan said ‘a Karori affair, a book by a Kaori poet, launched by another Karori poet, and sold by a Karori book-seller in a Karori hall.’

I find it hard to write an objective account of the evening. I had such a medley of emotions, chiefly it’s my best collection. I’m not used to shouting such comments from the roof-tops.

Anne had arranged a wheel-chair. Jenny wheeled me around. When it came to speeches they lowered the mike. Vince O’Sullivan launched the book. His comments touched me deeply for he addressed the book and the author in a way he showed an understanding of what I was attempting. His comments about Goya were very pertinent.

I spoke impromptu. I thanked Vince and all who’d helped make the occasion a good one. I explained how my illness meant that any effort was a great effort and that’s why I was not signing books individually but I had put my signature on all the books for sale.

I spoke of my dedication to Mum and thanked Anne. And finally Mark Pirie for his editing and publishing and his discovery of the cover painting. (blog Feb 26th). Anne finished the official part by reading two poems ‘Goya Rules’ (blog 1 Oct 2009) and ‘Thomas Hardy’ (blog 30 June 2009).

I was exhausted at the end. And yesterday was a real wipe-out. I sogged all day, incapable of reading, thinking or doing anything. Watched Dad’s Army and Underbelly episodes on DVD. In the evening we watched ‘In The Loop’ a satirical movie about the moves to war by the American and British government. Very funny in its way but also very scary and frightening – career, vanity, folly over-riding common sense and humanity.

I’m pleased to have publicly launched the collection, though the occasion's passing removes a goal. Still, new poems keep appearing.

Thanks Geoff for the photo.
Posted by harvey at 10:27 AM