A Tale of Two Caterpillars 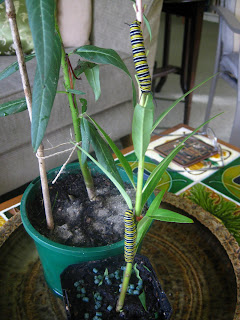 Jenn and Barrie from next door brought over two swan plants on Sunday afternoon with two large monarch butterfly caterpillars on one. They had just about devoured all the leaves on that one so at the end of the day we transferred them to the second plant.

Last year when we had a similar pair I’d christened Groucho and Marx. This year Anne claimed naming rights. As I’ve been watching Dad’s Army she christened them Mainwaring and Wilson.
(High excitement. A wasp in my study/bedroom as I worked at the computer. Anne with fly-spray in pursuit. ‘Don’t spray near my oxygen equipment.’ She didn’t. One dead wasp down the toilet).
They’d just about chomped their way through most of the second plant’s leaves when Mainwaring began to act differently. He stopped feeding and began feeling round as if searching for another branch to climb onto. He climbed to the bottom of the plant and explored around a bit before clambering up again. I suggested he was looking for somewhere to pupate.

Last year Groucho and Marx started going walkabout on the sofa, so I did some research and discovered that the caterpillars always leave the swanplant and move to a different kind of plant to attach and pupate - presumably because otherwise another caterpillar might eat the leaf they were hanging from.
So Anne cut a bough off a camellia tree and placed it in a vase. She then gingerly lifted him onto it with a bit of flax. He explored around a little before settling under a leaf, then he stayed still for a while under his chosen leaf, before attaching himself upside down. Aptly named – a born leader. Mission completed.

Wilson began to exhibit the same behaviour. An identical repeat performance from Anne saw him stop crawling about as he settled on a leaf near the top of the branch. Niece, Jenny, leaving, having spent almost a month here – she climbed Mt Holdsworth over the weekend; we shall miss her – said ‘he hasn’t picked a good spot.’ So Anne’s nomenclature was spot on again. He hasn't attached yet, he's still in the waiting stage. A born loser? Time will tell. Often the original Wilson's words ‘do you think that’s wise, sir’ preceded some change in fortunes. 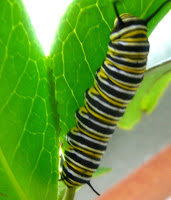 We’re talking about another caterpillar. It’ll have to be called Pike. . .
Anne took the photographs too. She’s been busy. Have a look at her new food blog at http://somethingelsetoeat.blogspot.com/

This photo is of Wilson on a camellia leaf trying to make up his mind as to what it is that he wishes to do.
Posted by harvey at 3:05 PM